Rise of the Self-Replicators

Early Visions of Machines, AI and Robots That Can Reproduce and Evolve 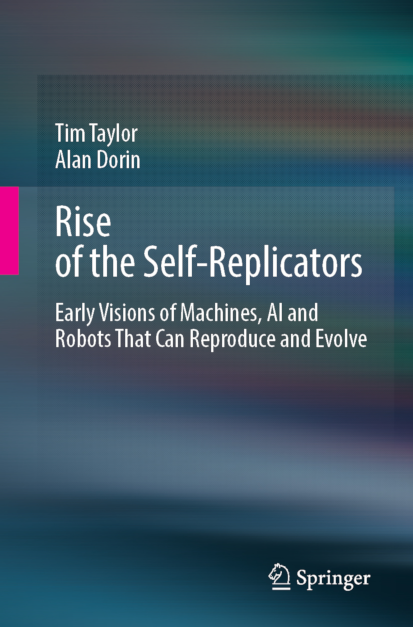 In Rise of the Self-Replicators we delve into the deep history of thought about machines, AI and robots that can reproduce and evolve. Although these might seem like very modern concepts, we show that people were thinking about them as far back as the mid-1600s and that the discussion gathered pace in the 1800s following the British Industrial Revolution and the publication of Darwin's On The Origin of Species.

Behind all of the work we discuss lie two central questions:

The core of the book provides a chronological survey and comprehensive archive of the early history of thought about machine self-reproduction and evolution. It covers work by scientists, philosophers, science fiction writers and engineers, including many examples that have not been discussed elsewhere before now.

We show that the work described can be categorised into two main flavours: one concerned with the evolutionary potential of such technology as a route to superintelligent AI, and the other concerned with the general manufacturing capabilities of self-reproducing machines with potential long-term applications including the colonisation of other worlds.

We conclude with a discussion of what we consider to be the most likely directions for future work, emphasising that the management of risk in the development of this technology should be based upon a firm understanding of the issues at stake. In doing this, we hope to inspire a broad community discussion about the significant implications of intelligent evolving machines.

Rise of the Self-Replicators will be of interest to the general reader and a valuable resource for researchers, practitioners, and historians engaged with ideas in artificial intelligence, artificial life, robotics, and evolutionary computing.

Sci-fi movies and novels about self-replicating machines are but the tip of a very deep intellectual iceberg whose roots reach centuries back in time and tap rich veins of thought in literature, philosophy, and mathematics. Taylor and Dorin, active researchers in their own right at the bleeding age of such technologies, provide a masterful tour through this fascinating and little-known historical landscape. This book will fascinate a wide range of readers, from those who just love Terminator movies, to those who wish to think more deeply about where technology came from and where it may be taking us.

Rise of the Self-Replicators is undoubtedly exciting and inspirational for its primary audience—fellow members of the ALife community—as well as for philosophers, science fiction enthusiasts, and futurists. ... Historians of technology will benefit from [the book] if they use it as a compendium of intriguing primary sources, which they can contextualize, interpret, and analyze in accordance to their own research agendas and motivations.

Taylor and Dorin have done an excellent job; they have performed a deep search in many libraries and archives, have contacted historians and experts from various fields and various countries, and have checked the original sources written in non-English languages. ... [They] have performed a fascinating survey on self-replicators, and also have enriched the book with engaging stories and details about how the key people in this field are interconnected. ... [An] excellent book.

Buy the official Springer version of the book in softcover or ebook format from the Springer store (also available to subscribers of SpringerLink), Amazon and other online and physical book stores.

If Springer has ever published any of your work, such as a paper in a conference proceedings, you are eligible for a 40% discount on any of their publications. You'll need to register for a MySpringer account if you have not already done so. Note that you won't see the 40% discount price while browsing their catalogue, but it will be applied when you add an item to your shopping basket.

As provided for in our publishing agreement with Springer, we are pleased to also offer free author-formatted versions of the entire book, to read online and to download in PDF format.

As described in Section 5.3.1 of the book, the British scientist Lionel Penrose commissioned two films to demonstrate his studies of mechanical models of self-replication. From the mid-1950s to the early-1960s he designed and built a series of ingenious and increasingly complex wooden contraptions capable of catalysing the formation of more of their own kind when provided with a supply of basic units to fuel the reproduction process.